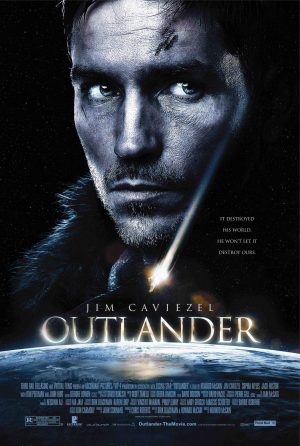 While he was editing the film, director Howard McCain heard some of my music and invited me to meet with him to talk about the score. Once we got together, it was clear I shared his enthusiasm for the project, and it clicked right away.  It’s hard not to get excited thinking about the score you could write when someone shows you a giant, flaming monster destroying a Viking village and its inhabitants.

It was apparent to me early on that the success of the score would rely on balancing three main elements — the Viking music grounds it in something familiar, the Moorwen music plays the alien, horror aspects of the story, and our hero Kainan gets a more militaristic, sci-fi approach.

I always knew a story like Outlander would lend itself to a score that’s very listenable away from the film. It’s an ambitious film, it oscillates between epic and intimate, tense and beautiful, past and future, action and calm. For someone who grew up watching imaginative adventure films, writing this score was a genuine pleasure.

A Note From The Director:

Movies are about heroes.

Those intrepid, sometimes flawed individuals who brave all odds, forgo all comfort, and overcome all obstacles to slay the dragon, kiss the girl and save the world for the rest of us mere mortals.

Making movies is no different.

During the struggle to get any movie made it always seems to come down to just a few people, in all the various departments, who, when the chips are down, the money is all gone, and the day is five minutes from being over, come in with that great idea, performance, shot, or sheer bit of brilliant artistry that saves the day. This is what makes it poissible to do the impossible on a shoe string. Call them what ever you want, but in my world they are the true heroes of the movie making process, and on Outlander, Geoff Zanelli was ours.

Geoff, through his music, took my potentially outlandish story about an alien human being who accidentally brings a monster into Vikings times, and made the film vibrate and hum with purpose. His work effortlessly and flawlessly bridges the worlds of science fiction and the historical, fusing them into one organic whole. In short, his music gave the film its heart and soul.

This is no mean feat and by all regards it shouldn’t work. Like chocolate and peanut butter, who knew they would ever taste so good together. But just listen to what Geoff is able to do with the soaring, rugged theme of the Viking world, and then the menacing, heavy footfalls of the Moorwen’s approach. Both are completely different in style, but both somehow feel of a seamless piece.

For my money, this fusion of opposites achieves its most operatic and haunting union during the film’s flash back sequence that depicts the destruction of the Moorwen planet. In that single cue, Geoff mixes the aural landscape of what almost sounds like some long lost Vangelis tune and a lone woman’s voice to crystallize the feelings of the entire film: beautiful, violent, and ultimately melancholy. Not the kind of feelings you would normally associate with a genre picture.

Lastly, I have collected soundtracks my whole life. I love listening to them and believe they should be able to stand on their own entirely separate from the movie. I think Geoff’s music easily stands up for itsself, taking the listener on his or her own unique journey.

So listen and enjoy. And know that in the world of movie making there are in fact still a few heroes left.