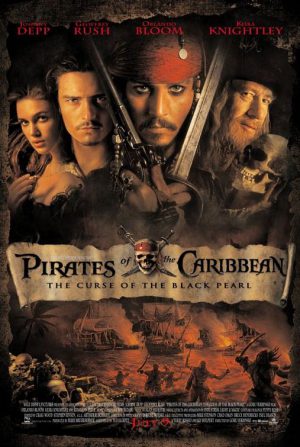 Pirates of the Caribbean: The Curse of the Black Pearl
(Additional Music)

We all knew Pirates was a great film, but no one could have predicted just how much it was going to resonate with audiences.  The film itself was risky with its daring acting performances, and having Gore Verbinski as a director meant we got to take risks with the music as well.

It’s well known how this score came together, but it was a very fast schedule so it was, pardon the pun, all hands on deck. I did a lot of writing on this film, much more than I can present here, but the pieces I have here are standouts for me. “Broadside” was a huge action sequence with tons of twists and turns. It has an iconic beginning, something that showed up down the road in the sequels as well. This cue is also how I got my Pirates nickname; on all the CDs I’m credited as Geoff “Broadside” Zanelli.

There was this idea that when the crew of the Black Pearl reveal that they are undead, the music should be “Cinderalla at a Metallica concert.” That was the basis for “Moonlight Serenade.”

“He’s A Pirate” became the piece of music that every Pirates film ends with. This was a collaboration between Hans and I. There’s an interview online somewhere in which Hans played the original demo of this piece. From there, it was placed in my hands and this is the result.