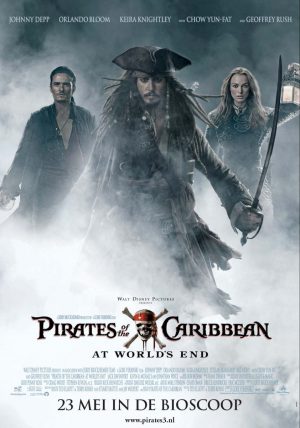 Pirates of the Caribbean: At World’s End
(Additional Music)

Pirates 3 was my chance to go and develop the theme I wrote for Tia Dalma in the previous movie. I wasn’t aware when I originally wrote her music that she was to become Calypso and, literally, a much larger character for this film.

Her theme is used throughout the film in all sorts of places, but it really plays in its fullest version during her growth sequence, in the piece “Calypso”.

In addition to handling most of the Tia Dalma plot, I did many other things for the film. For instance, I wrote “Entering The Bath House” as well as “Seduction” for when Sao Feng seduces Elizabeth.  There is also “Shipwreck Cove” and “Lift Off,” both made up primarily of my own arrangements of Hans’ themes.

When Pirates 3 was finished, I realized I’d spent the last 4 years either working on a Pirates film, or knowing one was about to go into production. It was a great thing to be a part of, to watch the franchise grow, and I’m very pleased to have been the only composer other than Hans Zimmer to have been involved with the original trilogy.